Romanoff traveled to Ojai on several occasions from 2011 to 2014 with Art Division students and faculty.
They all stayed at the farm of Andrea Rich to paint, draw, and relax in nature. His images capture the magic of that time.
​February 26 to March 19,2022 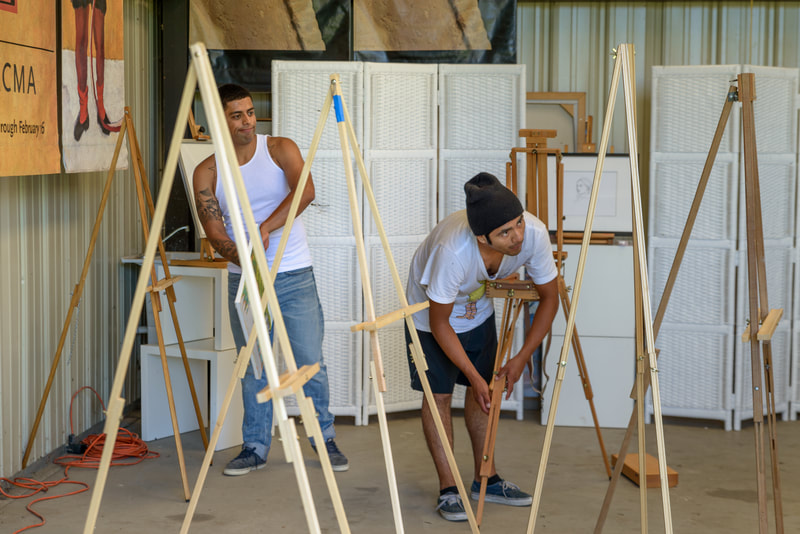 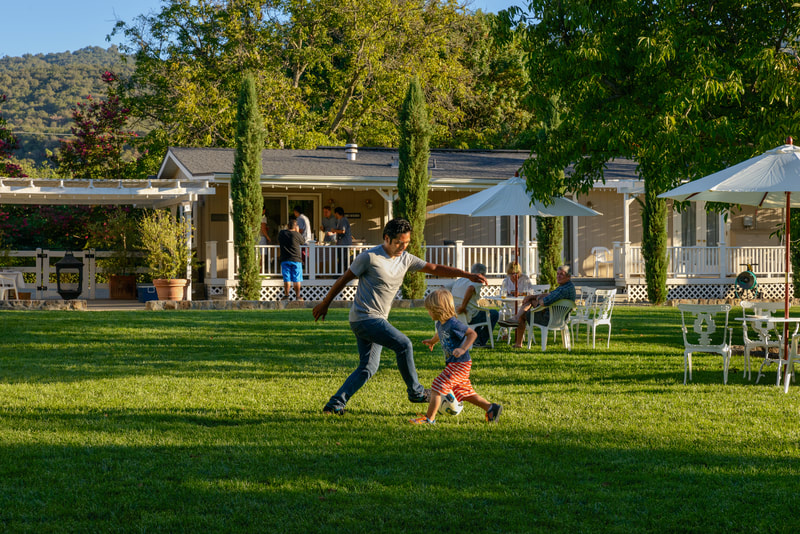 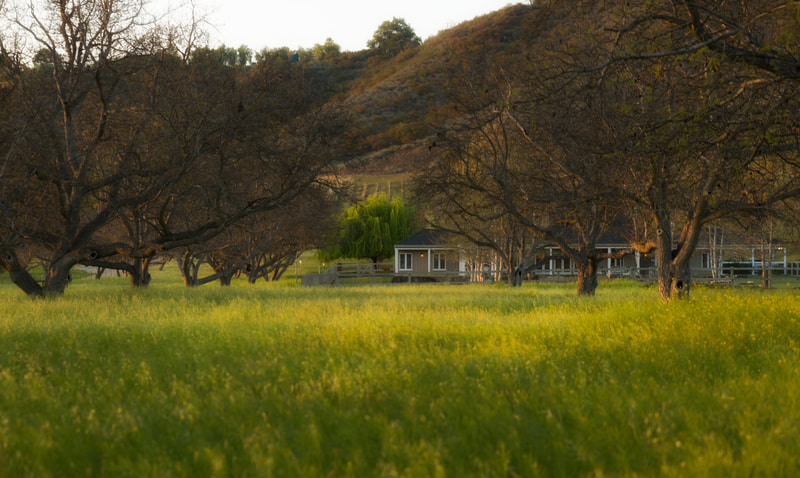 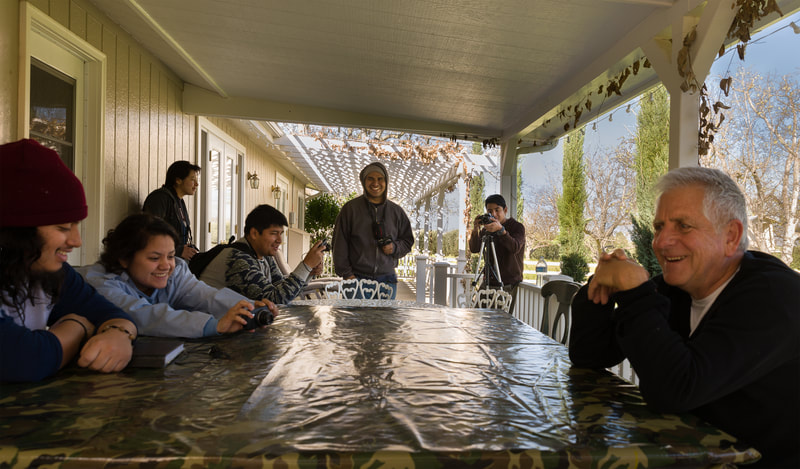 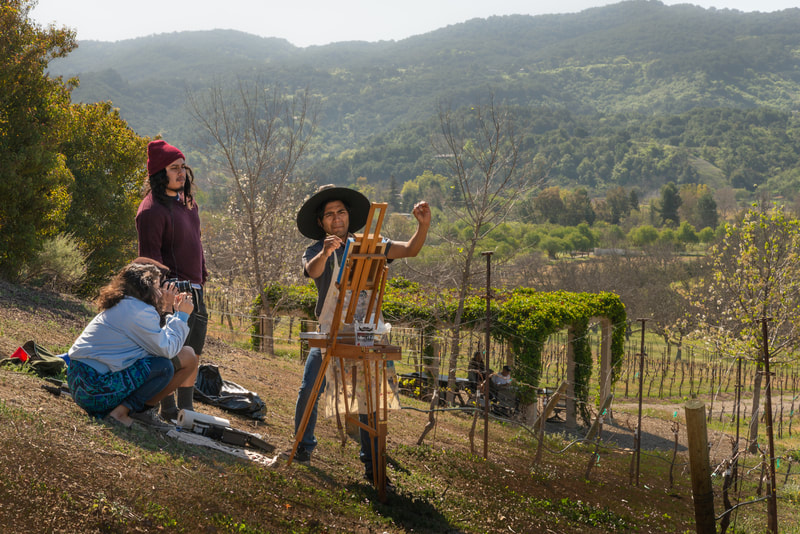 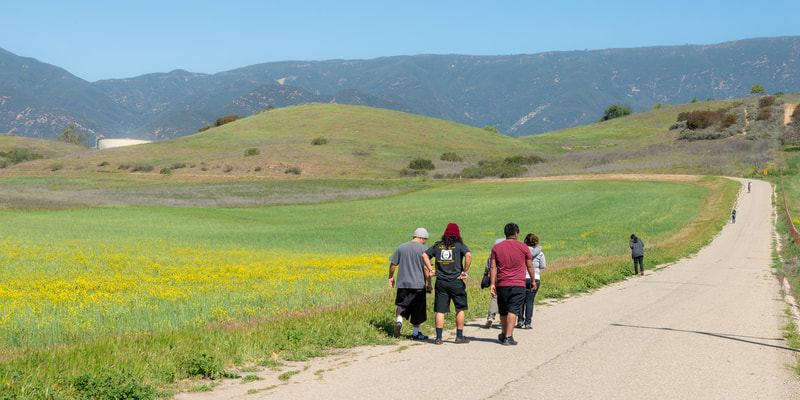 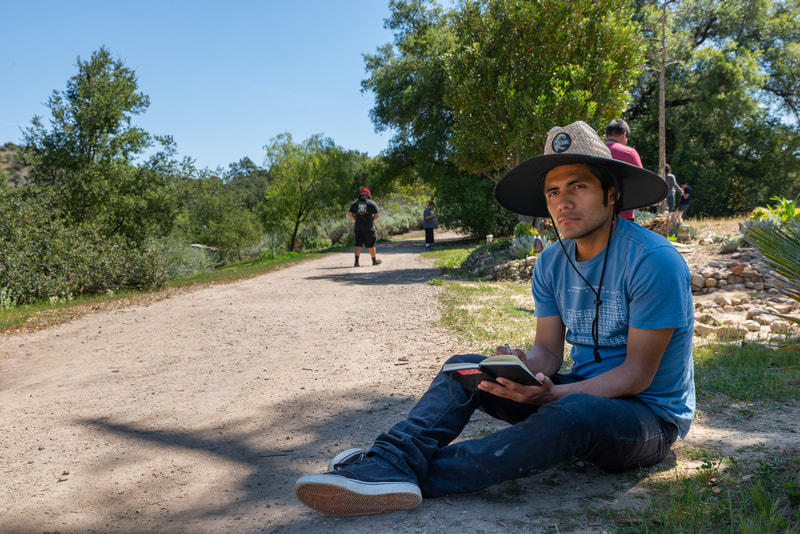 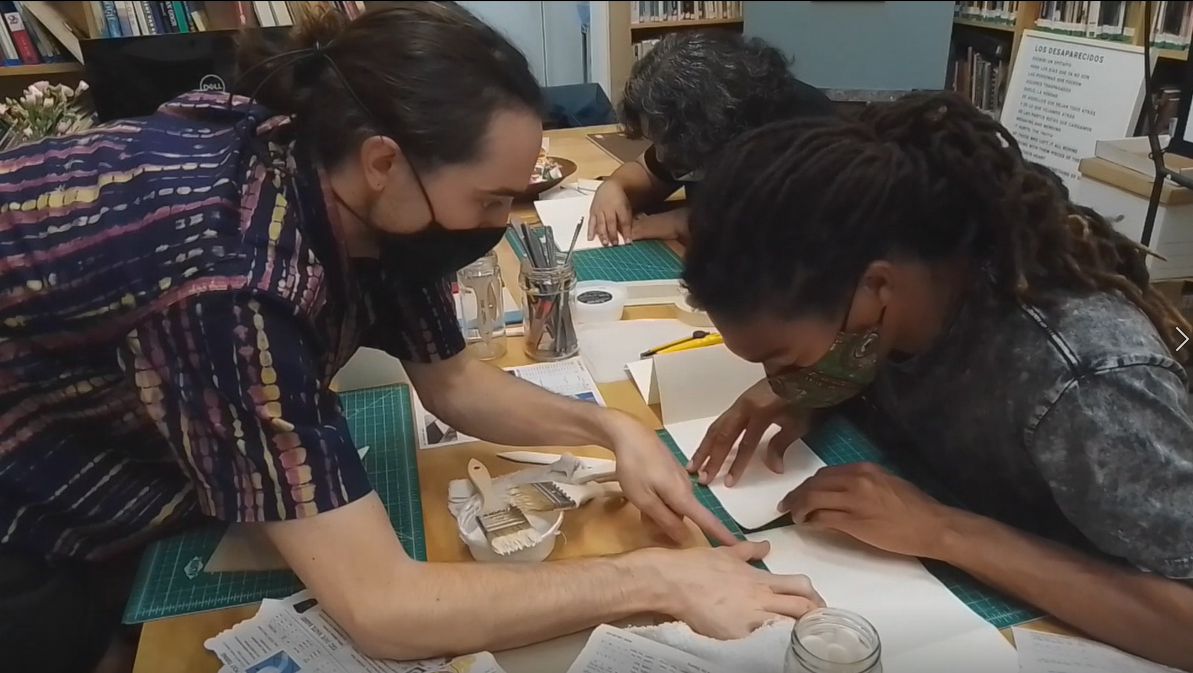 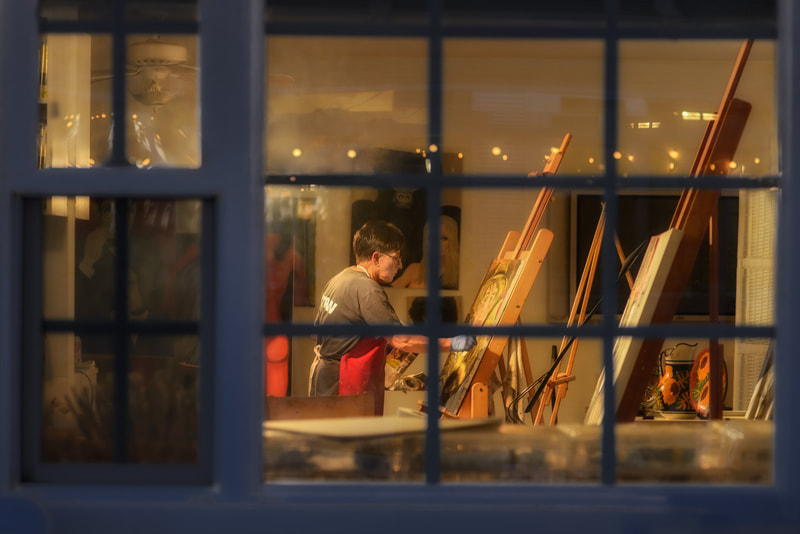 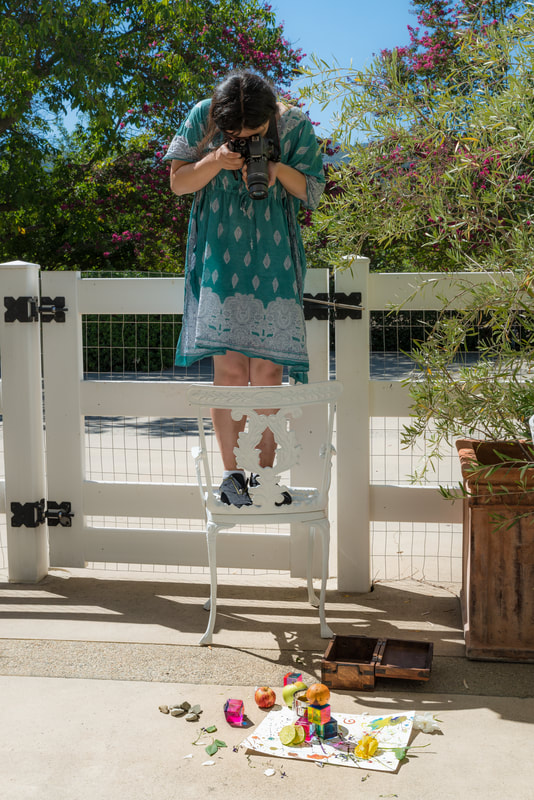 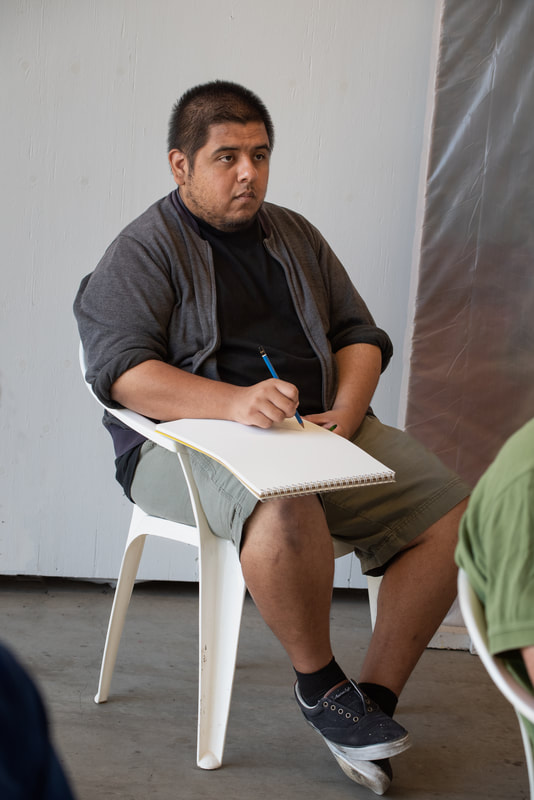 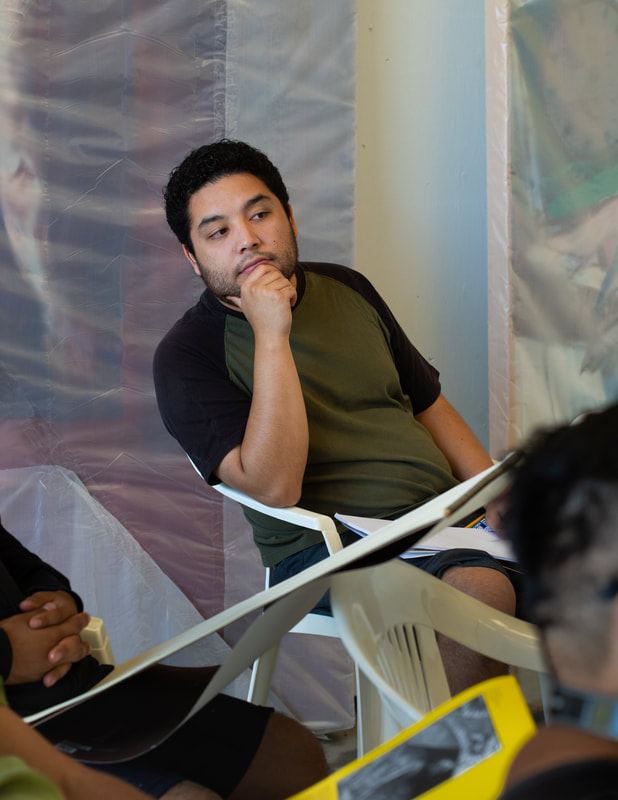 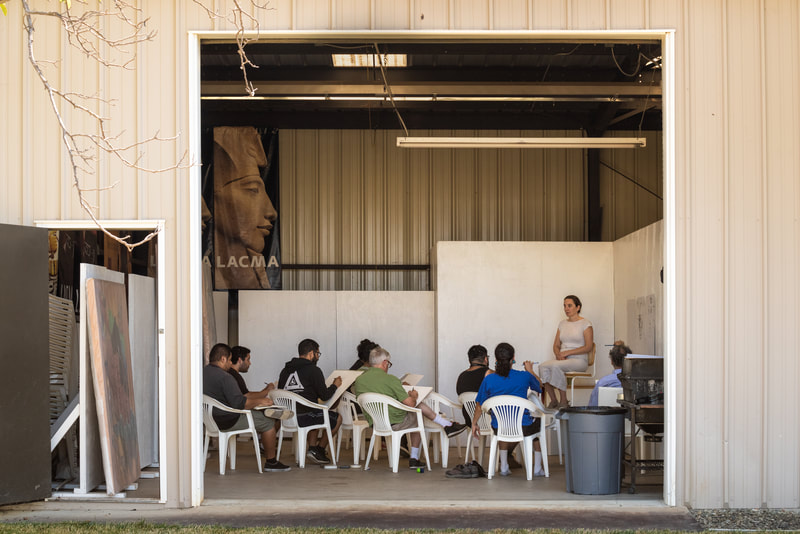 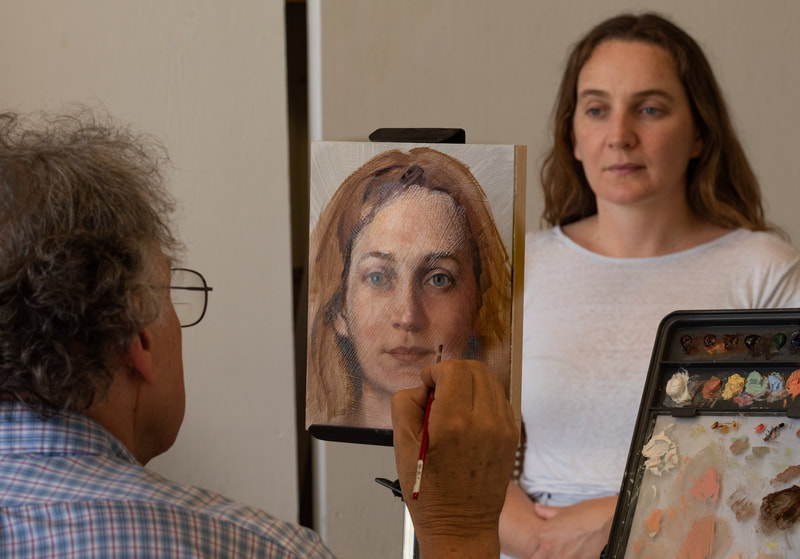 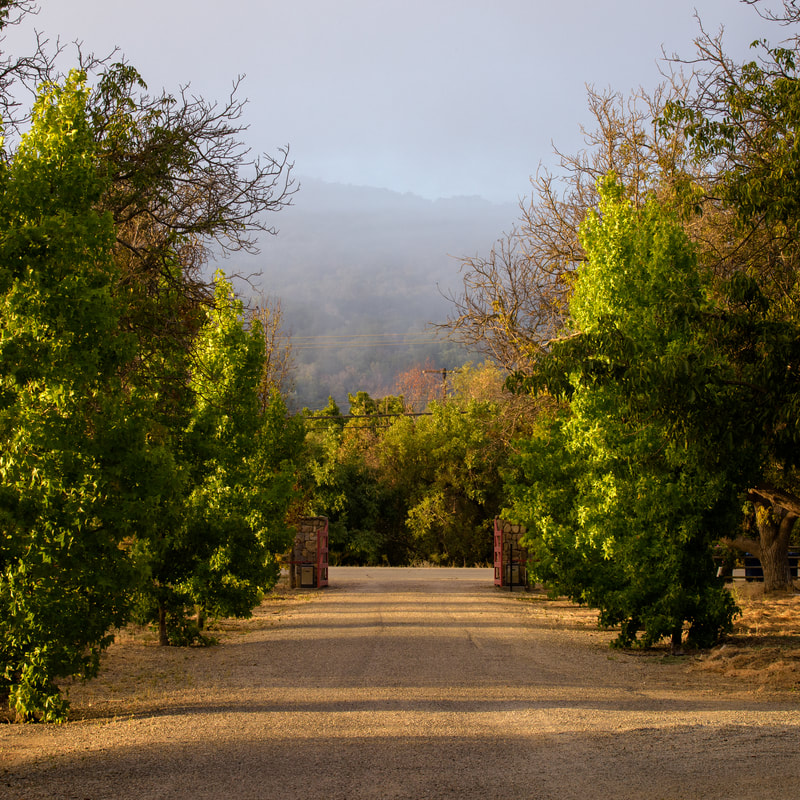 In 2011, Art Division started holding retreats in Ojai at Andrea Rich’s farm. Our last retreat was in 2014, the spring before Andrea’s death. These trips, from the crowded, noisy neighborhood of MacArthur Park to the lush, quiet landscape of Andrea’s Ojai home, were a relief for all us.

I first met Andrea at a dinner in 2010. I admired the work she had done at LACMA, supervising the completion of the magnificent Renzo Piano building. Over dinner I told Andrea about the work Art Division was doing with young art students in our neighborhood. She told me about the NextGen program she had started at LACMA which helped young students  attend museum events for free. It was a program she thought would be appealing to our students.

Since Andrea had a home in Ojai, I invited her to visit us in a couple of weeks at artist, John Nava’s Ojai studio, where I was going with eight Art Division students to a figure-drawing workshop led by John. She showed up mid-class and was impressed by John’s instruction, the focus of the students, and the quality of their work.That day, she invited John, me, and the students to her farm a few miles away. We would be guests at a cocktail party she was hosting for friends from Los Angeles.

Andrea’s farm was the size of a football field. At one end stood her stately home where she held the cocktail party on her porch. At the other end of her property, I could see a metal barn and a guest house. A swimming pool shimmered in the middle of the well-watered field.

During the party, Andrea turned to me and said, “I want to show you something.” We went down to see the guest house with three bedrooms and a large living room and kitchen. The barn was vast and empty. “Dan,” she said, “Art Division can use these spaces any time you want.” I knew the barn would work as a studio for the students. Stunned by Andrea’s generosity, it took me a few days to fully grasp what an amazing offer this was.

The students also played volleyball, swam in the pool, and played cards late into the night. Alex Nataren, Art Division advisor and chef, prepared countless meals. Andrea joined us for most dinners and art-related conversations.

After retiring from LACMA, Andrea quietly took up painting. She worked diligently in her studio next to the barn. Perri Guthrie and Paula Holt were also present for most retreats and graciously helped organize the weekends. Andrea repeatedly told me what pleasure these retreats gave her. “All of you have brought life to this place.” When I would thank her she would reply, “This is why I built it. Don’t thank me.”

We held debriefings at Kate Mantilini’s restaurant on Wilshire and Doheny. I always arrived early to get a table for the two of us, but also to watch Andrea enter, drenched in Paloma perfume, in her red Chanel jacket. We would talk for hours about the past retreat, about the one to come, and about our dreams for Art Division.

For years, Andrea had been battling cancer and many other illnesses. She never complained. In the spring of 2014, we went on what was to be our final retreat. Andrea spent most of the time sequestered in her home. Late Sunday afternoon, just before leaving, a couple of us went to swim one last time. Andrea came down and laid in a lounge chair by the pool. She was uncharacteristically silent, yet she seemed utterly content.

A few months later she was admitted to UCLA hospital with leukemia and never left. About the same time, Kate Mantilini’s closed. In the blink of an eye, an era ended.

Her counsel, generosity, and wisdom are missed.
Andy Romanoff’s photographs of those years are on exhibit here for the first time. Andy went on many Ojai retreats to lead photography workshops and became a part of our community. None of us thought much about the pictures he was taking. No one realized how thoroughly he was documenting our time there. He stealthily took hundreds of photographs. One of the strengths of the photographs is the lack of distance between Andy and his subjects. In the images of the meals, Andy was one of the diners. When we were putting our exhibition together he was helping with the installation. The eighty photographs on display also mark Andy Romanoff’s eightieth birthday.

While these retreats were happening, I was only aware of the present. To look at Andy’s beautiful photographs now, I am aware that they lovingly document a specific period of time that has a beginning, a middle, and, of course, an end.